Talk about an oxymoron.”Super Tuesday” is right up there with “airline food,” “Microsoft Works” and “government organization” when it comes to contradictory phrases. But Super Tuesday it is.

Today, residents in 12 states and American Samoa will cast their ballots in either a primary a caucus or a hullabaloo, making it the biggest day of the 2016 presidential ruckus. Why American Samoa? Why the hell not, you racist! 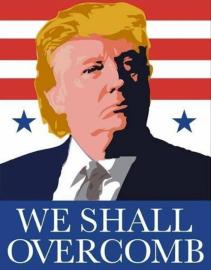 Let’s see if any other GOP candidate has the huevos to take Trump down like a harpooned hot air balloon.

For the democrats, Bill Clinton’s wife has been trying really hard to come across as empathetic, understanding and human. And it’s cute how Vermont Sen. Bernie Sanders/Larry David still thinks he has a chance. (It’s not good when voters are choosing their candidates based on which SNL character they like the most.) 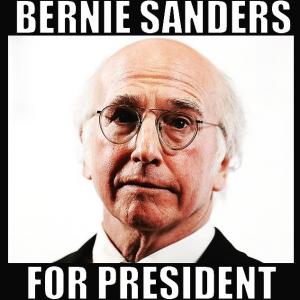 Super Tuesday is Super Complicated and there are all kinds of legal-ish rules that awards delegates to the person with the biggest caucus. (I think it might be Hillary.) There are all kinds of predictions, polls, fortune cookies and Magic 8 Balls trying to determine the outcome of today’s circus.

Here’s a rundown of what will happen today: The American people will lose.

Luckily, any president that wins in November has a judicial and legislative branch to tone down the crazy. Granted, those branches can add to the crazy–but I guess it could be worse: 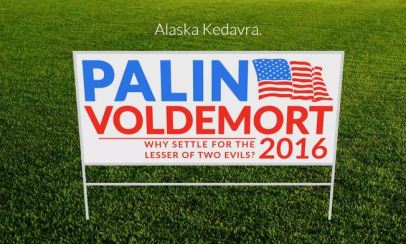 I know, I know, greatest athletes, heartbreaking stories. I get it.

Every two years, NBC saturates the airwaves with backstories and teasers while the Olympic Games take place in the background. Enough already. Let us just watch the events without your commentators’ blathering inaneness. 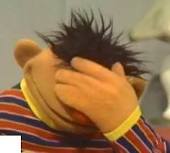 (Ernie’s facepalm for the Games.)

Here are 5 Reasons to Stop Watching the Olympics on NBC:

#1–Coverage is a joke. Did you see USA gymnast John Orozco doing his thang on the rings during the men’s all-round? Neither did anyone else. How about coverage of anyone other than the “stars” of the Games? Nope.  Unless you’re a medal contender, you don’t get air time on NBC.

#2–Stating the obvious.   “I think that fall might cost him some points.” “World Record time! That’s gotta be the fastest she’s ever gone!!” “Stepping out-of-bounds will lower her score.” “I’ll bet he’s disappointed in that performance.” Hint: Mute button. 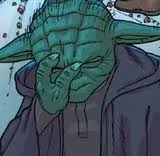 (When a Jedi Master gets frustrated, that’s pretty bad.)

#3–Human interest stories. I appreciate how hard the athletes work. I really do. I worked with Olympic athletes for four years and was SO impressed with their level of sacrifice and dedication. But even THEY got tired of hearing their backstories set to violins with crying kittens and sad-looking panda bears. Can we have a little less manipulation in the media? Oh, I forgot. That’s what MEDIA stands for: Manipulating Every Decent Idealistic American.

#4–Editing for Americans. Does NBC think we can’t appreciate athletes from other nations? Are we that horrible? (Don’t answer that.) Did you see the special tribute during the opening ceremonies dedicated to the victims of the 2005 terrorist bombing in London? No?  That’s because NBC preempted that portion of the ceremony to show a Ryan Seacrest interview with Michael Phelps. Thank heavens we have NBC watching out for us because we know the Olympics are an American-only event. 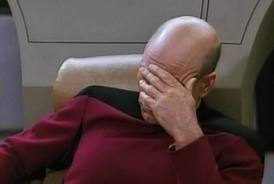 (Really, NBC? Even Jean-Luc Picard gives you a facepalm.)

#5–Super Slow-Mo replay.   How many times can we watch a gymnast fall off the beam? Too many. Especially when  slow-motion cameras move frame by frame by frame by frame so it takes 20 minutes to watch a 2-second flub. Or the slow-motion victory where Michael Phelps reaches for the wall in insane slow-mo. His fingers move millimeter by millimeter toward the finish line. Stop playing with your toys, NBC.

NBC, I understand you spent $1.18 billion for the rights to drive the American public insane for two weeks, but please. Show us the events without commentators talking down to the audience and without the dumbing down of competitions because you think the American people are illiterate boors.