Sitting in the petri dish of a playground at a nearby fast-food chain, I watch my grandkids jump around like just-released-into-the-wild baboons. Like every other adult in the room, I hoped this stop would be a fun diversion, a place the kids could play while I read War and Peace.

Kids on playgrounds are fascinating the same way the Spanish Inquisition was fascinating: lots of violence, torture, crazy zealots and tattletales. Sitting with the book I won’t be able to read, and eating cold French fries, I’m the Jane Goodall of the toddler kingdom, as I study their animal-like behavior.

There’s a hierarchy to the madness, with the older kids sitting at the top of the pyramid. They push toddlers out of the way and block slides until little kids cry.

The next level down are kids between the ages of 4 and 8. Not quite ready to be the bullies on the playground, they tail after the leaders hoping to be included in any dastardly plan.

Toddlers make up the lowest level of the playground food chain. These cute little kids are a pain in the asset as they try to establish a presence without being trampled by oblivious 10-year-old boys. I’ve witnessed several toddler smack-downs, including my granddaughter who started a fistfight with a little boy over a pretend steering wheel.

The fast-food playground smells like a mildewed diaper pail. It also has a fine layer of mucous coating every possible surface. Everything is sticky. Bacteria gleefully thrives.

There’s a logjam of kids at the bottom of the slide, backing up traffic and causing overall mayhem. Older siblings shepherd brothers and sisters through the throng of screaming and thrashing little bodies, in search of fun and excitement, while being screamed at by their mothers.

I watch kids scramble through the maze of colorful gerbil tubes, listening for the sound of my granddaughter’s screech as she fights her way to the slide, where she refuses to go down, triggering an uproar in the playground ecosystem. Her brother finally convinces her the slide is fun and they both tumble to the bottom. They run back up and do it again.

I hear snippets of conversations. “That boy is taking off his clothes.” “She put ketchup in my ear.” “Look! I can fly!” But when the Lord of the Flies Preschool bus pulls up in front of the building, that’s my signal to skedaddle.

As soon as I announce it’s time to leave, my granddaughter scurries up the tunnel, refusing to come down and throwing poo at anyone who approaches. I send her brother up to get her and hear his bloodcurdling scream as she kicks him in the head, and climbs higher into the hamster maze. He finally drags her down, both of them crying, before she steals someone’s shoes, and runs toward the restroom.

Security tackles her and wrangles her back to the playground. She’s covered with either BBQ sauce or blood and tries to scuttle away as soon as I put her down. Chaos has erupted. We duck tranquilizer darts as we run serpentine to the exit.

I finally wrestle them into the car, wearing the wrong jackets and without socks. I spray them down with Lysol and have them take a big swig of hand sanitizer. I just survived a primate attack. Jane Goodall would be so proud.

The TV turned on and off all day. No matter how often I shut the kitchen cabinets and drawers, they were always open. I’d put toys and books away, and the next minute they were on the floor again. I kept getting pinched and slapped, and I was even head-butted a couple of times. I was pretty sure we had a poltergeist.

(Insane teenager freaking out. And a lady in a red shirt.)

But the psychic I hired to rid my home of this supernatural disturbance had a different idea. “Although teenagers attract destructive spirits because they’re basically horrible people, I don’t think it’s a poltergeist. I think you just have a toddler,” she said in a really creepy voice.

A toddler? It all began to make sense. My toddler had been possessed by a demon. I began listing all the strange occurrences and felt she had a point.

If your toddler exhibits the following behavior, it might be inhabited by one of Satan’s minions. 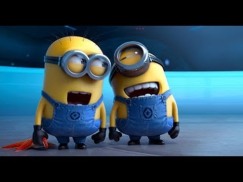 This is just a short list of all the demonic symptoms exhibited by my 3-year-old daughter. And although I was relieved my teenage daughter hadn’t invited a poltergeist to live in her bedroom, she was still a teenager. So, there’s that.

When silly, old Eve chose wisdom over nudity in the garden of Eden, what was her punishment? That she would be fruitful and multiply. In non-biblical words, she was doomed to have children. Seems like the penalty didn’t really fit the crime.

Did she understand, as she grew rounder and larger and moodier, that a parasitic growth was stealing her nutrients, sleep and sanity? When the baby started kicking, did she consider the fact she might be possessed by an evil spirit? She was correct.

There were no childbirth magazines, no social media sites, no mommy blogs–nothing. She was alone. In the wilderness. With a baby. (Yes, Adam was there. Not sure what he was doing. Probably renaming animals and practicing his Tarzan yell.)

Depending on your level of belief in evolution, fast forward thousands (more likely hundreds of thousands of years) and motherhood has become a thing. I guess it caught on, even though the process is brutal, bloody, hormonal and excruciating. And that’s not even considering toddlers and teenagers.

As mothers there is only one absolute when it comes to raising children: You have NO control.

Your kids will scheme, manipulate, scream, disobey, fight and lie right to your face. They’ll make you feel like you’re the worst parent in the entire universe, and they’ll have data to back up their claim. They’ll be ungrateful, unforgiving, cold, unreasonable and impossible. You’ll often feel like hiding under your bed with a bag of Oreos and a warm blanket. (Don’t bother. They’ll find you–and steal your Oreos.) 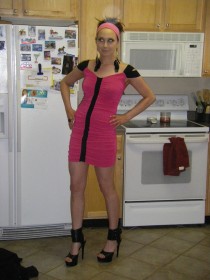 (Daughter heading out to go clubbing? Just smile and nod.)

You’ll seriously worry that your kids will end up on COPS or Dog the Bounty Hunter, and you wonder how they’ll tolerate you visiting them in prison. You’ll get upsetting phone calls from teachers, irate emails from neighbors and you’ll start avoiding eye contact with parents at the grocery store. You’ll be convinced that once your kids have left home (whether through arrest or by other means) you’ll never hear from them again.

You’ll find yourself having an enjoyable adult conversation with this person who once threatened to call social services on you. You’ll receive a text message with a smiley-face emoji and you won’t wonder if you’re being manipulated. Your kids will come for dinner and no one will storm off to another room and slam the door. It’s almost like interacting with humans!

You’ll realize these tiny terrorists who never let you have one ounce of privacy are suddenly pretty cool. They talk in coherent sentences and speak without complaining or retaliating. You’ll watch them try to reason with their own little toddler tyrants, and while you might have the occasional eye tic of sympathy, you’ll feel an unconditional love.

There’s no right way to be a mom. We get up every morning with the best intentions. Sometimes we succeed. More often we fail. There are no accolades, awards, thank-you notes, pats on the back or even an encouraging smile. We all feel we’ve done it wrong.

I’m sure every mother since Eve has experienced that overwhelming feeling of inadequacy as we teach these children how to adult. We can only pray they’ll do better than we did.

I’m a pretty happy person. I’m realistically optimistic and usually expect the best. But I can also be a bit moody (“What the hell does THAT mean?”) and can get gloomy if I find myself doing the same thing over and over again.

I’m also pretty good at cheering myself up. I have lots of go-to activities that lift my spirits because sometimes it’s the small things that make life worthwhile. (That wasn’t a sex joke.)

Along with a box of See’s toffee, snuggling at night with my hubbie, stargazing and doing yoga, these things always bring a smile to my face:

(But I’m not sure if I’m emotionally ready for this book.)