People are obsessed with to-do lists. I don’t get it. Why start your day with an entire page of things you MUST get done before your head can hit the pillow at night? Sounds like a recipe for madness. 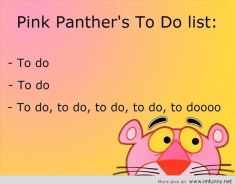 Here’s what I do instead: I make a list of things I refuse to do so when it’s time for bed, I can experience a sense of moral superiority instead of abject failure. Something like this:

Because I didn’t resort to any of that petty behavior, I think I deserve a hot fudge sundae before bed.