I watched the movie “Still Alice” over the weekend. It stars Julianne Moore as a woman diagnosed with early onset Alzheimer’s and it’s depressing as s***. But, like when I watch most disease-focused movies, I began to wonder if I was afflicted with this degenerative illness.

I’ve been convinced I’ve had ALS (The Theory of Everything), Satanic possession (Carrie), stupidity (any Adam Sandler flick), a lethal airborne virus (Contagion) and the zombie illness (28 Days Later).

So I could completely freak out, I visited the Alzheimer’s Association website to get a list of the following warning signs. According to this list, I’m going downhill fast.

Memory Loss: Wasn’t 2009 only two or three years ago? Can someone remind me when it’s my grandchildren’s birthdays? When did milk jump up to $4 a gallon? Who’s the old lady wearing my clothes? I spent HOW much on Amazon?

Challenges problem solving: I’m reading, “The Martian” by Andy Weir where an astronaut is stranding on Mars for a couple of years. He has to a) make food, b) make oxygen, c) make water and d) stay warm. If I were in that situation, I would a) die.

Difficulty completing daily tasks: Sometimes just getting out of bed is a monumental achievement. Finding matching shoes, not eating sugar cookies for breakfast and brushing my teeth with toothpaste (not acne medicine) is exhausting.

Trouble understanding visual images: I watched Nicki Minaj’s video “Anaconda.” Not only was I completely confused, I was also rendered temporarily blind. 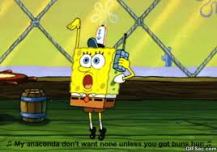 (Just watch the SpongeBob version. It could save your corneas.)

Problems with speaking or writing: Because my mouth works faster than my brain, I often say the wrong thing at the wrong time to the wrong person. And as for problems writing, you should see me the hour before my newspaper deadline. I’m writing like a Red Bull addicted chipmunk.

Confusion in regards to time/place: My husband woke up the other day and said, “In six weeks it will be our half-year anniversary!” I stared at him blankly for a few minutes before asking, “Anniversary for what?”

Misplacing things: At work last week, I looked all over my desk for a document I was holding in my left hand.

Withdrawal from social activities: I guess they’re assuming there was a time I actually enjoyed participating in social activities–otherwise I’ve had early onset Alzheimer’s since fourth grade.

Poor judgment: So, you’re saving I HAVE had early onset Alzheimer’s since fourth grade.

Just like the bird flu, mad cow disease and malaria, I’m pretty sure I don’t have early onset Alzheimer’s. Yet. At least not that I remember.