So you have a spouse. Now what do you do?

Marriage is much more than mindlessly irritating the person you love for the rest of your life. Marriage is a sacred bond that states you promise to listen to your spouse chew his/her food until the day you die.

But how do you make it last? What can you do (that takes little or no effort) so your spouse thinks you’re the bomb?

Here are some of the laziest ways to strengthen your relationship:

Touch each other. A gentle touch creates a spark of affection. However, the following touches will get you divorced faster than you can say “alimony.” No touching my feet, chin(s), waist, knees or that part on my arm where my tricep muscle should be. And no tickling! For God’s sake, no tickling!

Cook dinner together. You know, like in the movies where the couple turns on the radio and starts dancing while slicing carrots, onions and potatoes? Like that only with a lot more sliced off fingers and 4-letter words. 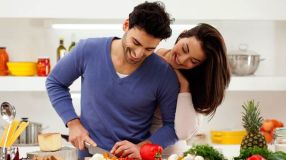 (It’s always a good idea to sneak up behind someone who’s holding a knife.)

Be playful. A co-worker suggested I drop a handful of flour on my husband’s face while he’s sleeping. “It will be hilarious,” he promised.

Joke’s on me. After calling 9-1-1 because my hubbie inhaled a lungful of unbleached flour, I had to clean up the mess on the dry-clean only comforter before changing the sheets and promising to sleep in the guest room for a week.

Don’t be super sensitive. If your spouse walks on eggshells when you’re around, there could be a problem. First, who the hell left all those eggshells on the floor!? Second, if your spouse is never sure which personality you’ll be today, it can cause tension between the two (or more) of you.

Show your partner you’re carefree by laughing and tossing your hair. Don’t take everything so personally. Stop slamming doors when your husband mentions your potato salad tastes like s***. Shake it off. A lifetime in prison isn’t worth it.

Spend time alone. Even best friends need a break, especially if you’ve both suffered a week of constant touching, bloody meals, flour ingestion and hurt feelings. Maybe go your separate ways for a few hours, if only to contact an attorney.

4 thoughts on “Lazy Ways to Improve Your Marriage”