A piece of my heart died on Tuesday when I heard Carrie Fisher had passed away. She changed my childhood and rewrote what it meant to be a powerful woman.

When I was a young girl, Princess Leia was everything I wanted to be. Brassy and brave, and full of swagga while carrying a blaster and saving the galaxy in a floor-length dress.

In later years, my admiration grew. She was so willing to talk about things no one discussed, and so willing to be her own wonderful self. She was never a damsel in distress, never a maiden looking for her white knight. Carrie Fisher was already complete and goddamn fine with who she was.

Here’s why I loved her:

Her razor-sharp wit. Who knew a woman could be funny AND smart AND successful AND throw norms out the window? She was a knee-slapping, rip-roaring, pee-leaking, side-splitting, cheeks-hurting comedic genius. If she’d survived this heart attack, she would have written a brilliant book about her experience and the subsequent media ape-shitting that followed.

Her honesty. She said, “You’re only as sick as your secrets.” She was brutally honest about her addiction and mental illness.She shared her struggle without glossing over the messy bits–and threw in heavy doses of dark humor.

(If you haven’t read “Postcards From the Edge”, you need to buy a copy. Tuh-day.)

She never forgot her Star Wars roots. It’s hard to be a real-life super hero. Carrie Fisher was not Princess Leia. But she knew to millions of fans, she represented a rebellion against the Dark Side. She was gracious in her acceptance of that role and re-embraced it as General Organa. She continued to kick galactic ass, enthralling a whole new generation.

She was entirely herself. Carrie Fisher was not perfect. In a time when image is everything, she refused to believe that. She said offensive things. She pissed people off. She refused to be silent in regard to body-shaming and the unrealistic expectations imposed on women in the spotlight–and out of the spotlight.

She loved her French bulldog. Gary Fisher was one of the most pampered and recognizable pooches in Hollywood. With his Twitter account reaching  more than 10K followers, his posts following her death were heartbreaking as he faithfully waited for her to return. 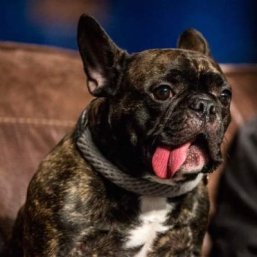 (Gary Fisher during yet another interview.)

Just like Gary Fisher and millions of fans, I’ll miss Carrie Fisher terribly. The world just got a little less funny, a little less sarcastic and a lot less beautiful.