So you’ve been suckered in by the astounding beauty, the majestic mountains and the plethora of frozen yogurt shops. You’ve decided to relocate to The Beehive State (which is an apt motto since everyone here is basically a drone trying to get buzzed). But before you take the leap and immerse yourself in Utah culture, here are some things you need to know:

You will absolutely be approached by representatives from The Church of Jesus Christ of Latter-day Saints. First, it will be a formal visit by two spiffy looking young men in cheap suits. Then your neighbors will invite you to various potlucks and family home evening events (which is an entirely different blog). Then two or three older men will turn up on your porch, inviting you to church. These people are either bishops, stake presidents or security alarm salesmen.

You can purchase alcohol–if you know the secret password and handshake.  Utah’s alcohol rules are created by people who 1) don’t drink, 2) believe drinking alcohol will send you to hell, 3) are unmoved by persuasive arguments and 4) like to wield their self-imposed power in a Donald Trump-like way. (A sober Donald Trump.)

There is no separation of church and state. Any legislative issue in Utah must be (unofficially) approved through The Church (see above). Only when The Church slowly nods its head do legislators take action. It’s also why a bunch of teetotalers run the Dept. of Alcohol Beverage Control.

Statewide, diversity hovers at -2 percent. Strangely enough, the state is becoming well-known for its variety of ethnic foods. Even stranger, these diverse foods are usually created by white men who served missions for The Church in various parts of the world. There is a large population of Mexican and Latin Americans in Utah, who add life and color to the state, but most people don’t acknowledge that bit of info.

The average age for a girl to marry in Utah is 19. Officially, they say it’s 23, but most girls are on their second marriage by then, with two or three kids, and she’s just starting to sell multilevel products to her family. 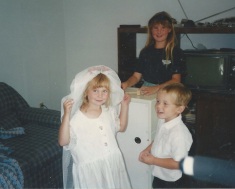 There are no professional sports teams in the state. People might argue that the Jazz basketball team is “professional,” but we all know the Utah Jazz is basically a farm team for the rest of the NBA.

7 thoughts on “Things to Know Before Moving to Utah”