I’ve been a dedicated parade attendee for more than four decades. I’m not sure why. It’s not like watching a local parade is the same as enjoying the Macy’s Thanksgiving Day Parade with its bloated, floating cartoon characters. It’s more like watching paint dry.

(When the librarians stroll by, pushing book carts, you  know you’re watching a small-town parade.)

Each year, the beauty queens float by on their crepe-paper concoctions, with themes like “Honoring the Past” or “Striving for the Future.” I’ve never seen a float with the slogan, “Kicking Back and Enjoying Today” where, instead of standing and waving, Miss City could recline in a hammock, drinking spiked lemonade.

And too many cities have asked parade participants to STOP THROWING CANDY! This is insane. Next to Halloween, parades are the very best, free candy events in the universe!!  I leave with my pockets stuffed with salt water taffy, Smarties, smashed suckers and Tootsie Rolls. I understand city leaders are concerned about residents’ safety, but really? I could understand the candy ban if people are throwing baseball-sized jawbreakers into the crowd, or those pointy rocket suckers. But taffy? I can’t imagine that doing any serious damage. I’d like to see the number of Tootsie Roll emergency room incidents that caused city leaders to outlaw candy throwing. Boo. 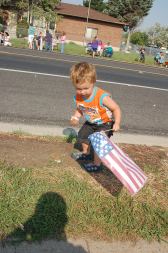 (I’ve trained my grandchildren to run into the street to get me candy.)

Here’s a parade idea: what if marching bands actually played music?!?! Call me crazy, but watching overheated, sweaty band members march by without musical accompaniment seems a leeeetle paradoxical. But, then again, having heard some of these bands “play” “music,” maybe it’s best to let them  pass by in silence. (Disclaimer: I marched in my share of parades as a flute player–not good enough to be a flautist–and I have “Let’s Go Band” scarred into my psyche. Permanently.)

Why are clowns still a thing in parades? I had hoped climate change would force them into other lines of work–like not scaring the s*** out of kids.

(And don’t forget the random snow plow. In August.)

And why must there be cars, cars and more cars? Especially if the passengers aren’t throwing candy. You can only look at so many VW Bugs before you want to punch the family next to you.

Finally, there’s always that one random dude walking the parade route, handing out candy–and you’re not quite sure if he’s a politician or a pedophile. (But I still take the candy.)

(And I still can’t explain this creepy dude.)

Now that parade season is over, cities have an entire year to do it right next time. Either way, I’ll be there cheering the local librarians and snatching candy from babies.

One thought on “Watching the Parade Go By”