Since then, Halloween has become a multi-million dollar business. Leave it to Americans to prostitute fear. And candy.

1975: I’d open my costume box which consisted of a plastic mask with death-hole eye sockets and a plastic-tarp of a costume. Or I’d get a homemade princess costume.  (And BTW, being a graceful princess is difficult when you have five layers of sweaters under your ball gown, making it look like you just ate a princess.)

Now: You can purchase elaborate costumes all year long. They’re expensive, gory and (for females) crossing the border into Slutville. You can’t just be a princess. You have to be a branded princess–with a history and a back story, and a bustier.

1975: Before the cool carving kits, all we had was a paring knife and our imaginations. You could carve triangles, squares or circles. That was it. Most pumpkins looked either a) scary, b) startled, or c) mutilated. Someone was always accidentally stabbed. 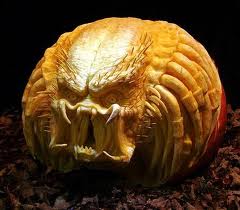 (This never happened 40 years ago.)

1975: My mother taped Halloween pictures in the front window, and if she was going all out, she’d twist black and orange crepe paper across the window.  We were a simple people in the ’70s.

1975: Classroom parties consisted of four things. First, the Halloween parade where we’d dash through classrooms for fellow students and parents. Second, we’d play Halloween Bingo vying for a black and orange pencil. Third, we would decorate ONE pumpkin-shaped sugar cookie. (My cookie had more frosting and sprinkles than Ke$ha’s underwear drawer.)

Now: Schools are doing away with Halloween parties, parades, songs, and fun. What’s the point of going to school if you can’t dress up on Halloween? I’m predicting a rise in drop-out rates.

1975: Some kids used cute pumpkin buckets to beg for candy, but I had no qualms about looking like a greedy bastard when it came to getting my share of the Halloween booty. I grabbed a king-size pillowcase to gather my candy, never worrying I looked like a homeless Wonder Woman. Plus, the holiday was a night-long event where we’d travel the county looking for homes giving out whole candy bars.

Now: Sanitized versions of trick-or-treating have popped up all over the country. New rules consist of, “Only visit the neighbors we know,” “Stay off the freeway,” “Get home before 7 p.m.” and “Let’s all go as a family!” Babies.

And don’t get me started on Trunk-or-Treating.